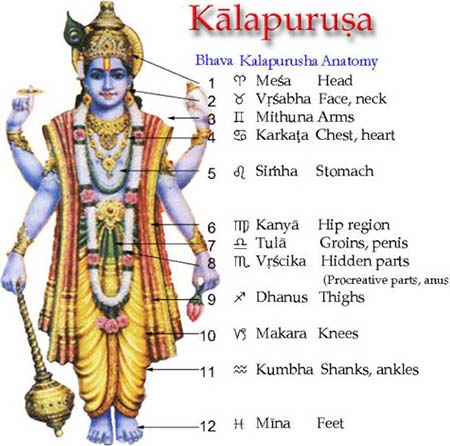 In simpler terms for predictions – Afflicted / Spoiled Houses will give the diseases of that organ (This is just basic – there are many things to be seen apart from just this one !) 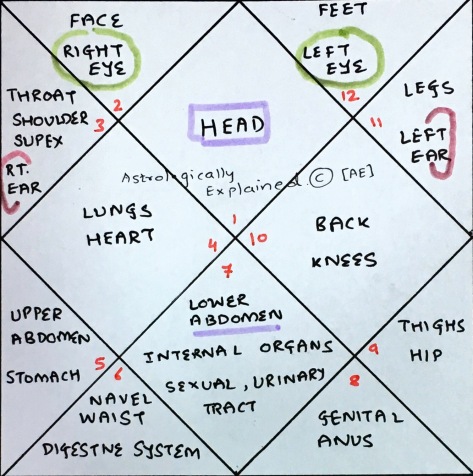 The Parts are based on concept of Kalapurusha. Note that your birth chart is actually the sky.

The ‘Kaala Pursha’ or the ‘Cosmic Man’ is a deep concept of Vedic astrology and can be explained in many ways. Jyothisha or Astrology (particularly the Vedic astrology) is regarded as Vedanga or a part of the ancient Vedas. There is a Vedic Hymn called “Purusha sukta” which explains the concept of universe and the constituent parts of the universes.

It describes the Virat purusha or the primordial being who is the motive power behind the mathematically precise universes which keep doing its function as ordained by him.

Kaala means time in Sanskrit. Every thing is consumed by time except the Virat purusha.
Virat means very big and so big that human mind cannot conceive its size.

So the purusha (male entity) who is beyond time and who rules over the all destructive time is known as Kaala purusha (Adapted From: http://www.soothsayers-india.com/Concept-of-the-Kala-Purusha-in-astrology.html) 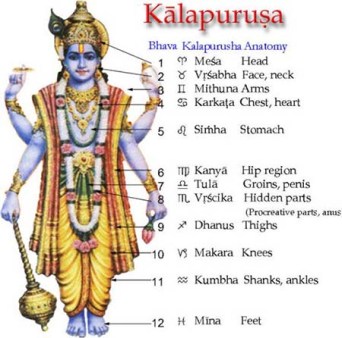 It is this kaal purusha that is in Sky and based on its placements the houses are their representations of Body Parts.